The tournament in Toledo Ohio has been an LPGA fixture since 1984.

Back in 2003, Jamie Farr formerly of the television series MASH, congratulated the winner Se Ri Pak by saying the following.

“Se Ri the members of the club here should pay you, because you own this course!”

Few truer words have been said on the LPGA tour.

How dominating has the Korean Golf Queen 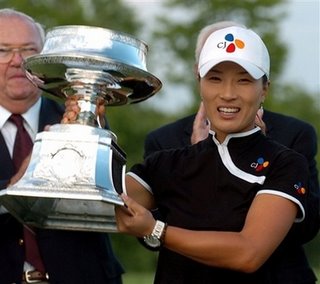 In 1997 Se Ri got a sponsor’s exemption to the Farr. She wasn’t an exempt player yet, and Se Ri missed the cut.

I’ll give the answer below.

In 1999 Se Ri set another type of record. She won the Farr in a 6-way playoff over Karrie Webb, Carin Koch, Mardi Lunn, Kelli Keunhe and Sherri Steinhauer. That was and still is the biggest playoff in LPGA history.

In 2000 Se Ri finished 3rd only one shot out of a Annika Sorenstam-Rachel Teske playoff.

In 2004 Se Ri finished 2nd losing by one lost to Meg Mallon. This was her only top 10 finish in the two year slump Se Ri suffered before winning the 2006 LPGA.

What makes Se Ri play like this in Toledo, no one knows. She is just comfortable and dominating at this yearly tour stop. Only Annika Sorenstam’s track record at the Mizuno Classic shows comprable domination in any LPGA event.

If you were betting on golf, you’d take Se Ri. If a bookmaker gave you more than a dollar for every dollar you bet, he or she would be out of their mind.