The mother of one of the best junior golfers in America, passed away this last Thursday in Florida.

Golf fans will remember Dakoda playing in last year’s Ginn Open. The tournament giving the young lady a sponsor’s exemption so Kelly could see her mother play. I lost my mom to cancer when she was only 53. God bless the Dowd family.

Kelly Jo Dowd, a cancer-stricken mother whose dream of seeing her teen daughter Dakoda play in an LPGA event was realized last spring, has died. She was 42.

She spent years battling breast cancer, which her family said spread to her bones and liver, and then to her brain in the final months of her life. She died Thursday night at her home in Palm Harbor, Fla., with her daughter and other relatives at her side.

“Kelly Jo didn’t know how to quit,” her husband, Mike Dowd, said Friday. “It was inspiring. The nurses said her heart was at 160 beats a minute for the last day and a half. She was fighting. That was Kelly Jo.”

Her death came just over a year after seeing her daughter play in the Ginn Open in Reunion, Fla., when Dakoda, then 13, and her family went public with their story, even knowing Kelly Jo’s death was expected. Shortly before the tournament, the family was told Kelly Jo would have only a few months to live.

Earlier this month, Dakoda, now 14, failed to advance in qualifying for the U.S. Women’s Open, clearly distracted by her mother’s rapidly failing health.

Dakoda Dowd, one of the nation’s top-ranked junior golfers, was invited to play in the 2006 tournament by Ginn Resorts president and CEO Bobby Ginn, who lauded the Dowds Friday as “a special family whose story touched a nation.”

“Kelly Jo Dowd inspired us all with her strength, courage and tireless efforts to educate both women and men about breast cancer, the disease that would eventually take her life,” Ginn said. “Her zest for life and boundless enthusiasm in spite of her condition lifted countless spirits and should serve as a reminder to focus on what is truly important in life.”

Dowd shot a 2-over par 74 on the first day, beating a number of major-championship winners, then shot 82 in the second round and missed the cut. 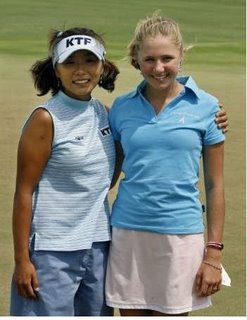 The Dowd family chose to tell their story with hopes that Kelly Jo’s plight â€” she ignored a lump for several months before being diagnosed with breast cancer â€” would be a strong reminder that women should be vigilant in doing self-exams and getting checked regularly.

A memorial service will be held Tuesday at Sylvan Abbey Funeral Home in Clearwater, Fla.