She won the Grand China Air LPGA by 3 shots. From the BBC-

Helen Alfredsson won the Grand China Air title in Haikou with a magnificent seven-under-par 65 in the final round. 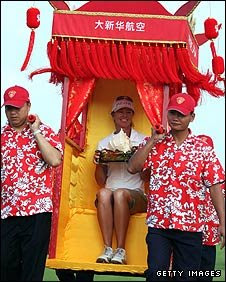 The Swede finished three strokes clear of Taiwan’s Yani Tseng in the first LPGA Tour event to be staged in China.

Alfredsson, 43, carded eight birdies and could afford a bogey at the last following a poor chip as she took her career earnings past the $5m mark.

England’s Karen Stupples led by five at the start of the round but a 75 left her five off the pace in fourth place.

Alfredsson began her charge with threes at the first two holes and covered the front nine in just 31 shots before another three at the 10th took her to the top of the leaderboard.

Playing three groups ahead of the overnight leaders, she also picked up shots at 14 and 17 before a five at the 18th provided the only blemish on her card.

“I was four up and didn’t have great pressure on me for the chip, but it was not a great shot,” she admitted.

Despite the error, the final groups were unable to challenge her 12-under-par total of 204, but Tseng, who won the LPGA Championship as a 19-year-old earlier this year, returned a 68 to pip Laura Diaz (72) for the runner-up’s cheque.

“Since I almost caught up with the leader, I am very happy with the position I finished. It was a three-day event – you never know what would happen if it was a four-day tournament,” said Tseng.

This was Tseng’s fifth runner-up finish of the year. I have to imagine Tseng has the Rookie of the Year title sown up. If would have my vote.

Were the mainland Chinese golf fans pulling for Tseng who is from Taiwan? It is hard to tell, because there is television coverage of the tournament outside of Asia.

Helen Alredsson would get my vote for comeback player of the year. Since finishing 2nd at the US Open, she’s had a incredible run. Four weeks to the ADT Championship and the million dollar winner.