He got injured in a game played last Saturday. From AP-

Roberto Luongo has a strained groin muscle and the Vancouver Canucks’ star goalie is expected to be sidelined at least a week — maybe longer. 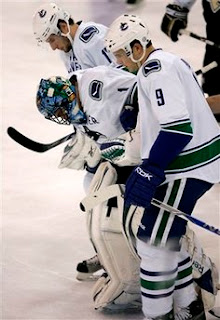 A two-time Vezina Trophy finalist, Luongo was injured five minutes into Saturday’s 3-1 victory at Pittsburgh and didn’t put any weight on his left leg while being helped off the ice by teammates. He had an MRI exam Monday and the Canucks announced the diagnosis after consulting with team doctors.

Luongo was listed as week to week with an adductor muscle strain in his groin.

“We don’t know, it’s the first time I’ve had an injury like this,” Luongo said just before Vancouver’s game against Detroit on Monday night.

Luongo has always been incredibly durable. He has played in as many as 76 regular season games in a NHL Season. The total amount of non-playoff games for all 30 NHL teams is 82.

With Luongo hurt, who will try to fill in for him?

“This is a great challenge for our group,” Canucks coach Alain Vigneault said. “Our players play real well in front of Curtis [Sanford], and Curtis is an experienced NHL goaltender. He’ll do a good job for us.”

Vancouver also recalled goalie Cory Schneider from Manitoba of the American Hockey League. Schneider, the Canucks’ first-round pick in 2004, leads the AHL with a 10-1 record and 1.37 goals-against average. He was second with a .945 save percentage.

The 29-year-old Luongo started 14 straight games before Sanford made his first appearance in more than a month Thursday at Minnesota. Sanford then replaced Luongo in Pittsburgh on Saturday, stopping 45 of 48 shots overall to win both games — his first victories since Dec. 12, 2007.

Sanford was 4-3-1 with an .898 save percentage last season, his first in Vancouver after seven seasons in the St. Louis organization, including a career-high 34 games and 13 wins with the Blues in 2005-06.

Don’t you just love the positive spin by the Canucks’ coach? Sanford is an experienced goalie, but not a very good one. Vancouver would be better off finding out how good Schneider is.