The cats won their fifth straight road game when Center Stephen Weiss got a shot past Goalie Miikka Kiprusoff in a shootout. Going back to November 30th, Florida has beaten the NY Rangers, Washington Capitals, Ottawa Senators, Edmonton Oilers, and now Calgary on the road. This marks a franchise record. 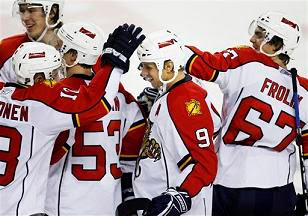 With the win, Florida goes to 14-12-3 for the season and are tied for 8th in the Eastern conference playoff standings. Which is incredible in light of how banged up the team is.

Florida’s road trip isn’t over yet. Next up is Vancouver on Sunday, then they come back east to play Carolina. Florida is overdue for a long string of home games. When they return to Florida, the Panthers will have played 19 of their first 31 games this season on the road. Could this be the year Florida breaks through to the playoffs for the first time since 2000?

*- This marked the third straight game Weiss scored the game winner for Florida.

*- Kamil Kreps got his first goal of the year. A short handed affair set up by a poor Calgary pass.

*- Tomas Vokoun in his first start since Nov. 26th, stopped 35 of Calgary’s 37 shots. Now who does DeBoer start against Vancouver- Vokoun or Craig Anderson?

*- Florida got off more shots against Calgary(29) than they did versus Edmonton(16). Still Florida was outshot 37 to 29.

*- Why don’t Vancover play their Sunday games at 5 p.m. local time like many other NHL teams? I’m going to have to stay up till 12:30 on Monday morning if I want to watch the Panthers.