He won the title from Floyd Patterson in 1959 but lost the title in a re-match a year later. He was AP male athlete of the year in 1959. 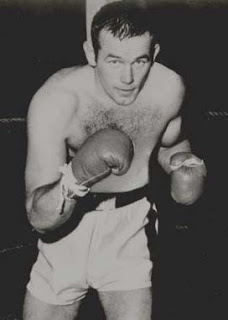 I got to meet Ingemar Johansson in the late 70′s thanks to my father’s involvement with harness racing.(There were many pro athletes who liked the ponies then) By then Johansson had put on quite a bit of weight and was asked to be Santa Claus for the Broward County(Florida) Christmas boat parade.

Unfortunately I don’t remember anything else from our meeting. His boxing career ended when I was still a toddler. RIP Ingemar.

Ingemar Johansson, the Swede who stunned the boxing world by knocking out Floyd Patterson to win the heavyweight title in 1959, has died, a longtime friend said Saturday. Johansson was 76.

Johansson died at a nursing home in Kungsbacka on the Swedish west coast, said Stig Caldeborn, a close friend who sparred with Johansson when they were in their teens.

Caldeborn said he didn’t know the cause of death but told The Associated Press that Johansson had recently returned to the nursing home after being hospitalized with pneumonia. 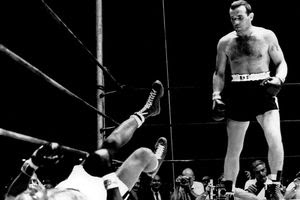 Johansson was diagnosed with Alzheimer’s and dementia more than 10 years ago, when he lived in Stockholm. He spent the rest of his life in Kungsbacka, only a few miles from the house where he grew up.

Johansson knocked out Patterson in the third round at Yankee Stadium on June 26, 1959, to win the heavyweight title. He floored the American seven times in the third round before referee Ruby Goldstein stopped the fight 2:03 into it.

Back home, hundreds of thousands of Swedes listened to the live radio broadcast at 3 a.m. as Johansson became only the fifth heavyweight champion born outside the United States. His feat earned him The Associated Press’ Male Athlete of the Year in 1959, only the second Swede to win the award.

Patterson avenged the upset loss a year later in the rematch in New York, knocking Johansson out in the fifth round. In March 1961, the Swede floored Patterson twice in Miami before being knocked out in the sixth round of the rubber match.

Johansson had four more fights — all wins, one of them a knockout of England’s Dick Richardson for the European title in 1962 — before retiring the following year.

Johansson was married and divorced twice, and is also survived by five children. Funeral arrangements were not immediately announced.