For the second year in a row, Tiger won at Bay Hill in Orlando Florida by making a dramatic birdie putt on the 72nd hole. Last year Bart Bryant was the loser, this year it was Sean O’Hair. 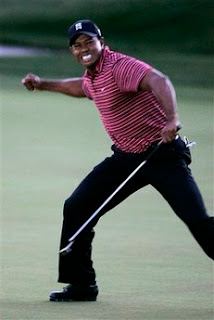 With the win the talk of Tiger not being back to form will end. It will instead be replaced by golf journalists opining on what his chances are of winning the Masters. The first men’s major championship of 2009 begins on April 9th.

Sadly another big golf tournament will get lost in the buzz of Tiger’s win today and all the hype for the upcoming Masters. The LPGA Tour’s Kraft Nabisco Championship begins this Thursday. A few years ago the tournament’s dates were shifted so it didn’t butt heads with The Players Championship any more. The TPC has since moved to May, but the Kraft still gets short changed. Golf writers and the Golf Channel rather talk endlessly about The Masters that hasn’t started yet than a major championship that is under way.

Back to Tiger. He’ll win at least one major championship this year. What a reckless golf prognosticator I am.