It’s only a sports book? 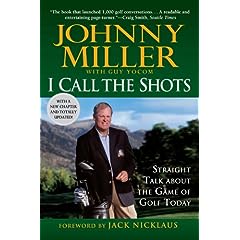 A month back I picked up pro golfer Johnny Miller’s book ‘I call the Shots.’ While not reading the book cover to cover, I’ve been glancing through or reading sections of it. Withing finishing the book I’m already asking a question.

Could anyone have put out a more shoddy piece of sports journalism?

Johnny Miller wrote the book with the help of Guy Yocom from Golf Digest. Miller’s literary agent Scott Waxman and the book was published by Gotham Books, a subidiary of Penguin Books.

All the parties above should be ashamed of the fraud they’re selling as a book.

The mistakes in this book are just incredible. Lets go down a list of what I’ve discovered so far.

Those are the mistakes I’ve found just flipping pages. There are a few more potential errors that I couldn’t confirm one way or the other. A thorough read of the book would mostly uncover more.

Do these mistakes matter? I think they do.

Obviously, some are just typos. Typos happen in any book, or blog post. LOL, its that some of these are seriously wrong(The Ed Fiori-Tiger Woods mythical playoff) or like the Janzen mistake where Johnny uses this to question a Ryder Cup selection. The Els playoff mistake also destroys the point Miller was trying to make.

Whats so irksome about this is, a simple check of the internet via google, wikipedia and the New York Times archives confirmed all of what I wrote above. Yocom works for Golf Digest, why didn’t he bother to check their archives? Or the PGA tour’s record books? Then the PGA has a serious problem keeping track of their own records.

Then if I was writing a book for sale, I’d want it as close to perfect as possible. My name is on it, I’d want it to be the best damn golf book on the market. So I wouldn’t trust my memory and have someone check the facts.

My reasoning is, if someone makes as many errors as I point out above, all the stories Miller tells in the book come into question. If his memory is this faulty, who’s to say much of what he writes is true.

Maybe Johnny Miller and Guy Yocom thought in 2004 this was just a golf book. Shame on them for putting out such a shoddy piece of writing. Even at $5 on a discount shelf the book is a ripoff.