The 20-year-old from South Korea won the ADT Championship today. It was Shin’s 3rd LPGA win this year without her being a LPGA member.

Shin won by one shot over Karrie Webb. It was basically a Shin-Webb battle except for a few brief moments when Seon Hwa Lee tied Shin with a birdie on 16. Lee promptly double bogied 17 and finished 3rd. 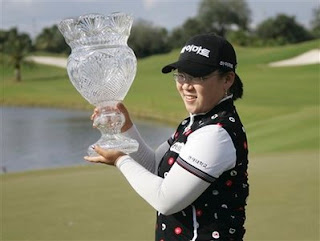 Along with that trophy she is holding, Ji Yai won a million dollars today. The ADT is the only LPGA tournament where the winner takes home that large a prize.

Suzann Pettersen shot a 79. The fiery Norwegian could be seen taking out her frustrations on her caddy. Paula Creamer was never a factor on Sunday.

She will be eligible for Rookie of Year, assuming Ji-Yai comes to play in the US. She has been tearing up the KLPGA, to a lesser extent the JLPGA for a few years now. You read it here first, the second South Korean LPGA golfer to qualify for the Golf Hall of Fame will be Ji-Yai Shin. Take that to the bank.

The complaints the Koreans are taking over the LPGA are about to get louder. Isn’t it about the best golfer is, not where in the world they are from?

Take this down also. If Shin plays the LPGA Tour in 2009, I predict Lorena Ochoa’s days as the #1 player in the world are numbered.