The Panthers tallied the most amount of goals this afternoon since they defeated Toronto on February 5th of 2008. With the win Florida is just one point behind Carolina for the last playoff spot in the Eastern Conference.

I have quite a bit to note about today’s exciting win. 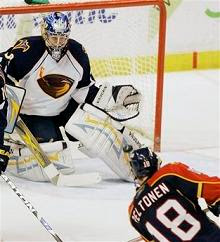 *- Radek Dvorak’s goal today was his second in a shorthanded situation this week. He had another SH on Sunday versus Montreal.

*- Michael Frolik’s goal was on a penalty shot. It marked only the second time Florida has scored one of these at home in franchise history. The other took place on March 2nd 2007 when Peltonen netted one against Tampa Bay.

*- The game was one of momentum swings. Florida was up 3-1 after the first period. Atlanta scored two unanswered goals in the 2nd to tie it at 3-3. Then Florida came out blazing in the third, two goals in less than two minutes, and five for the entire period.

*- Why is there a blimp at an indoor hockey game?

*- Florida has scored four or more goals in its last five games. That is the first time this has happened in franchise history.

*- Atlanta’s Goalie Kari Lehtonen is inconsistent to say the least. He shut out New Jersey a few days ago, then gives up seven goals to Florida.

*- Never heard the term ‘sin bin’ used for the penalty box before today’s game. Anyone ever heard it used? I admit to watching very little hockey for over 20 years before getting the ‘Florida Panther’ bug two years ago. Now my wife asks me daily- ‘Is there hockey tonight?’

*- Talking about the penalty box, Anthony Stewart and Chris Thorburn got put in it for five minutes each. The penalty was fighting, but it looked more like dancing to me. Where’s Wade Belak when you need him?

*- No Panther game again till January 16th. Boy will I be suffering from withdrawal by then.