Holding on for dear life- Miami Dolphins go to 9-5

The incredible turnaround from 2007 goes on as the Fins defeated San Francisco this afternoon 14-9. A late 49er drive to go ahead was ended when LB Joey sacked QB Shane Hill with 1:02 left to play. 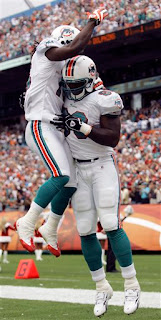 Some notes on the game

*- Miami’s defense did not give up a touchdown for the third consecutive week. I am still not sold on how good the unit is. Only because I don’t forget how Phoenix, Houston, and New England all set a match to it.

*- West coast NFL teams are 1-16 when playing in the eastern time zone this season. Miami won four of those games.

Miami continues to win but it hasn’t been pretty. They will win the AFC East if they defeat Kansas City and the New York Jets. If Miami loses even one of those two games, they are likely to be out of the playoffs.